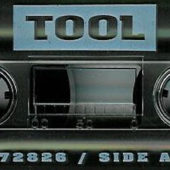 Notes / 2006: Finally, a replacement copy that is authentic. New scans above.
Notes: Tool’s demo tape. They are studio quality but have a slight tape hiss to the them, which is actually pretty hard to pick out. Interesting if you want to hear the demo’s. This was originally only in cassette format & was distributed at gigs. Soon, copies were made & they started spreading out. The demos even ended up on bootlegs like Sleep Forever. Word has it that they last one they gave out to a fan somewhere in the mid-west US during 1992 from the sound engineer or crew. Most copies of the demo tape are from MP3 source, this is not. There is a rumor that Tool did a cover of Ozzy Osbourne’s Crazy Train but all that is – a rumor. Also, there is an unreleased Rage Against The Machine w/Tool collaboration entitled “Kill The Revolutionary” that features both bands. It is of rough quality & was a demo for the film Judgment Night but was not used nor did it make it on the soundtrack — in case you don’t know, back in 1992/1993, the soundtrack featured bands like Cypress Hill w/Sonic Youth, Helmet w/House Of Pain & other metal/rap acts to collaborate on an album. Good movie as well. Anyway, the songs below are the actual studio demos, nothing ‘illicit’ or really unreleased.
Note: There are quite a few counterfeit cassette copies floating around. Beware – eBay may not be your friend.